Harvard referencing does not exist

I used the MLA handbook at uni as my citation guide, and liked how friendly it was when it came to my writing process (the logical use of as much of the author’s name as necessary, no fussing around with footnotes or endnotes).

For later academic writing, I gravitated towards using the Chicago manual of style, drawn by its considered authority, ubiquity and the options of using notes or in-text referencing. 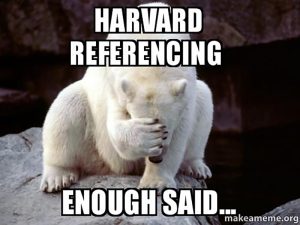 Since then I’ve adhered to the corporate style of the organisation I was with. In most cases, a definitive reference text would answer questions about tricky citations. I’d somehow missed needing to use Harvard referencing style for work or study, so never really needed to think about it too seriously. But I’d never been able to pin down a definitive source for Harvard style.

References to Harvard style are always a little vague (“Have a look at the uni library’s referencing guide”). People sometimes refer to Harvard style but there’s no definitive text to refer to – nothing like Chicago or the AP stylebook, even though it’s sometimes mentioned alongside those other styles. The general idea of Harvard referencing is an in-text author-date system. The details vary from place to place, though.

For example, the University of South Australia does this:

Auckland Uni uses full stops and flips the place and publisher around:

The citation tool Mendeley adds parentheses around the date:

Harvard itself claims no ownership of the style. When the Harvard library talks about citation tools, it lists APA, Chicago, MLA, a couple of legal citation guides, but with regard to “Harvard” style, it bluntly says: “The name ‘Harvard’ in this style is misleading. There is no official institutional connection between Harvard University and this citation style”. It’s just “another name for the author/date citation system.”

The Harvard library links to an article – ‘The “’Harvard system”: a mystery dispelled’, by Eli Chernin. Chernin mentions an 1881 paper by a Harvard zoologist as the first instance of author-date citation that later scholars adopted to make more consistent citations. Apparently, an English visitor to Harvard noted the style and gave it the name we use today.

Harvard isn’t a fleshed-out style. Even the Harvard library defers to the Chicago manual of style for more detail. So why has the name persisted? That English academic just wanted to call it something and the name from across the Atlantic stuck? The Chicago manual has its origins in the late nineteenth century, around the same time as the English visitor. The University of Chicago Press codifying its style around that period maybe adds a feeling that other organisations would have their own styles too.

Zotero, another citation tool, brings up dozens of institution-specific versions of Harvard when you search for extra ones to add (for example “University of Leeds–Harvard”). Uni library style guides aren’t going to stop mentioning Harvard style any time soon. But I did find it a little puzzling not being able to find a Harvard style book. So I’ll just say “‘author-date system” rather than “Harvard”, just to make it a bit clearer that I’m talking about an approach rather than a consistent and detailed institutional style.

By Mike Lim, an accredited editor and content designer based in Adelaide.