The sun was shining and the river was singing for Brisbane members gathering at DogBrew in Murarrie for the May Saturday lunch social. They all had a delightful lunch and convivial chit-chat.

Regretfully, our second annual Great Debate with our Western Australian counterparts following the EdsQld ABM in August has had to be cancelled. This engaging comedic debate that pits members against members will return when we can confirm a date that is convenient for our challengers.

The EdsQld-hosted Academic Editing workshops scheduled for July have also had to be postponed. While we hope to reschedule the online series later in the year, dates are not yet confirmed. Details will be made available via Gatherings or through social media channels.

Save the dates – upcoming events for 2022

Mark your calendars, this is a list of upcoming events over the next few months. The booking links and other details will be published closer to the dates.

The Events team is looking for new members to drive the 2023 program.

Does working remotely give you a sense of isolation from professional peers? Consider joining the Events Team. It doesn’t matter what part of the state you reside in, connection and collaboration with the Events team are geographically unrestricted. The wider the reach of the team, the wider the reach of our program. Participation is only as labour-intensive as you choose to make it. Chat with the events team today to see how you might get involved: edqld.events@iped-editors.org

Ian Mathieson, EdsQ’s Events Officer, participated in the 7th Australian Outback Writers Festival in Winton, from 21 to 23 June. He presented a one-hour talk for festival folk, formally titled Editing tips, but better described as A chat about stuff writers might find useful to know about editing and editors. IPEd and the resources available from our organisation received several mentions, spreading awareness. The Festival produced an anthology of short fiction from its 2022 competition. The closing event was a sunset refreshment on the escarpment north from Winton; Ian captured this image. 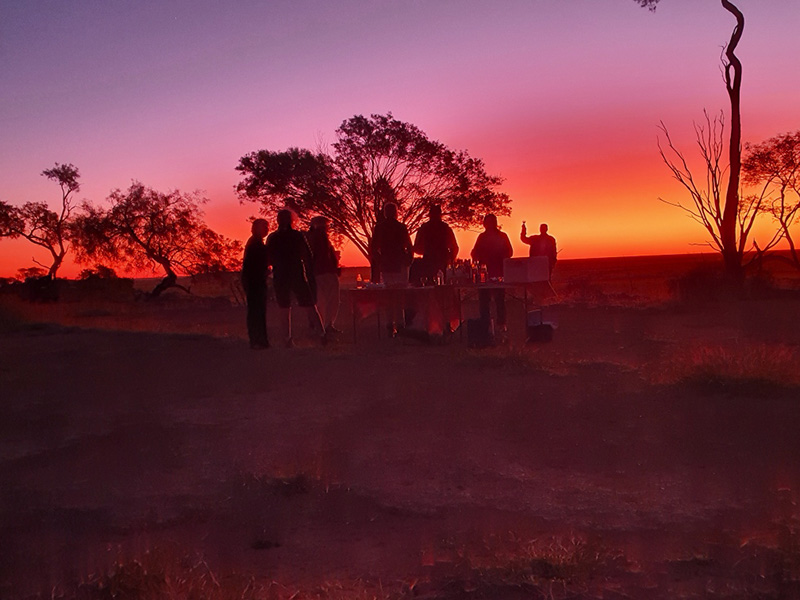