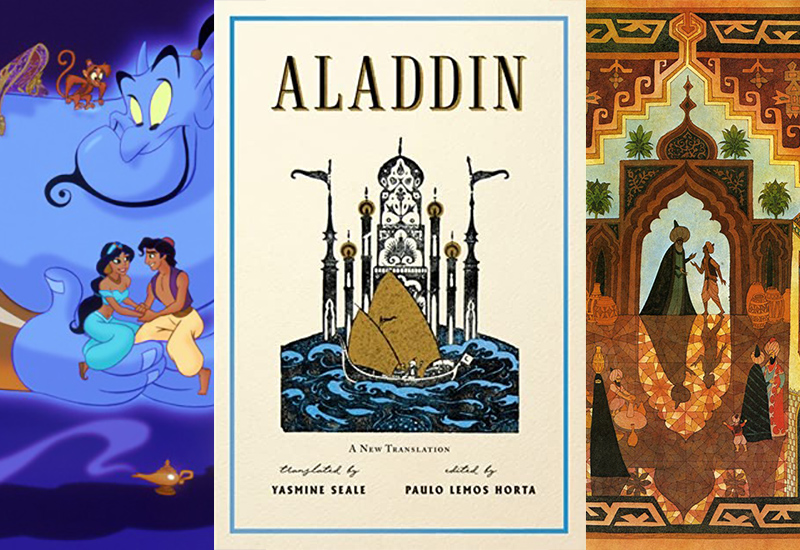 Editors Western Australian branch President Jess Gately hosted the Fiction in Translation Book Club on Tuesday 2 August. The book club was born of an interest in translated works and research, where participants are involved in the choice of text, encouraged to carry out their own research and engaged in discussion.

The focus of this session was on the book, Aladdin: a new translation, translated by Yasmin Seale and edited by Paulo Lemos Horta.

At the beginning of the session, Jess briefly introduced the focus text and she explained some of the history behind how these oral stories had come to be written down. Jess also read the introduction by the editor, Horta, who explained how the translator, Seale, approached the translation of this work.

Participants discussed their own connection to the text and compared translated versions, including the Disney fairytale style, to the work of Seale.

One participant had taught a university course on a Richard Burton translation of the story of Aladdin, and shared their knowledge.

Another participant noted there was a version translated by Edward William Lane. This led to a discussion of culture and past trends in translating works to lean towards depictions of orientalism and ornamentation, or to alter the origin of the characters based on the translator’s background.

Our discussion turned to character analysis and comparison to other representations in other versions, such as of Aladdin’s mother who appears in Seale’s version and largely drives Aladdin’s cause in the story. Participants noticed that Aladdin’s portrayal ranged from lazy and reckless to industrious and philanthropic, depending on the translated version.

Yet, in Seale’s version, one participant noted that the magician observes and tests Aladdin, and he still doesn’t discern Aladdin’s true character.

Perspectives were shared on female versus male translations of classic works, and the reasons behind works being translated only by certain genders.

Some participants, who work as translators, raised how the change in the use and meaning of language over time can cause difficulty for translators.

There may also be a requirement to cater the work to, or include iterations from, the current cultural or time context. This may cause a strong contrast in the original meaning or intention of the oral story.

While researching, some participants found articles about Yasmin Seale and her new translation of Aladdin and shared those links, and Jess shared an article in relation to the gender translation discussion.

Interesting observations were also made about translation theory, the premise upon which the book club began.

It was an enlightening and engaging session and we look forward to the next Fiction in Translation Book Club, on Tuesday, 4 April 2023. The next book for discussion is Autobiography of a geisha, translated by G. G. Rowley.