The program synopsis included enough clangers to have any editor either twitch or salivate. The “untie” in the event title was intentional. The synopsis set the tnoe perfectly … oh, there I go; tone, silly. Introducing the panel, Ruth offered a “fast, eclectic journey … sipping from the great pool of language”.

He used the example of A Spring Song from CJ Dennis’s Songs of a Sentimental Bloke to show us when the vernacular started to be published in Australia, amusing us with his rendition of: 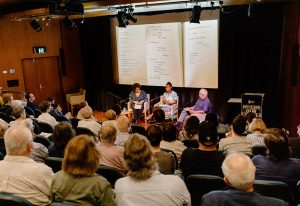 The world ’as got me snouted jist a treat;

Then he followed up with EE Cummings’s 1940 poem, my father moved through dooms of love, discussing layout and (lack of) punctuation, while noting its suggestiveness and strength.

Jasmin noted that language has, for a very long time, been used to include or exclude people, and spoke about the perspective of people for whom English is a second language. Let’s be more inclusive.

She presented a piece of her own prose that uses both English and Torres Strait creole, Yumplatok. Then she followed up with one of Kirli Saunders’ poems, Canbe, discussing her use of space and layout. She explored how important it is to use language positively, sensitively and carefully.

Commenting on an extract from Russell Hoban’s 1980 novel, Ridley Walker, Ruth homed in on the specific example of how the spelling system he used might generate a discussion between author and editor. Was it consistent? Unlike other books that use just a scattering of strange spellings to suggest the combination of sound, syntax and stretched expressions, this book is written entirely in roughly phonetic, evolved English. It was jarring at the start, but made a lot of sense; one could admire the creative consistency and the effect of keeping the reader anchored in that strange world.

Roly then turned to how English is rising to the challenges of the internet and SMS, reminding us of the restrictions from the early days such as the 140-character limit on tweets. The Oxford English Dictionary’s 2015 word of the year was an emoji. Pointing out that emojis are elements in communication, Roly outlined the vigour with which the decision was defended. He noted this as a watershed change. 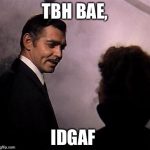 He next showed a meme of the two actors, Vivien Leigh and Clark Gable, from the movie, Gone with the Wind, in which the classic closing line, “Frankly, my dear, I don’t give a damn” has been modernised to “TBH BAE IDGAF”, noting the intersection of various pieces of knowledge readers need to get the joke.

Jasmin turned to the need for editorial styles and style guides to reflect current practice including perspectives of, and respect for, First Nations people. She listed a number of valuable guidances about this, including The Tyee (an independent online Canadian news magazine). A useful resource is the AIATSIS Code of Ethics for Aboriginal and Torres Strait Islander Research.

She noted that personal preferences should be taken into account. For instance, she prefers the title “First Nations” rather than “Indigenous”, while others have different preferences.

Language is changing and this produces dilemmas. For instance, some of Enid Blyton’s words and usages are very controversial today; this raises challenges for an editor. Should they be edited, or would doing so violate the essence of the work?

The event wrapped up with Ruth’s solid promo for IPEd; Roly’s comment that there is not a single English but “Englishes”, a process in motion, in ferment; and Jasmin’s call to action for more First Nations editors.

Some takeaways for the humble scribe: