Friday essay: we are the voice – why we need more Indigenous editors 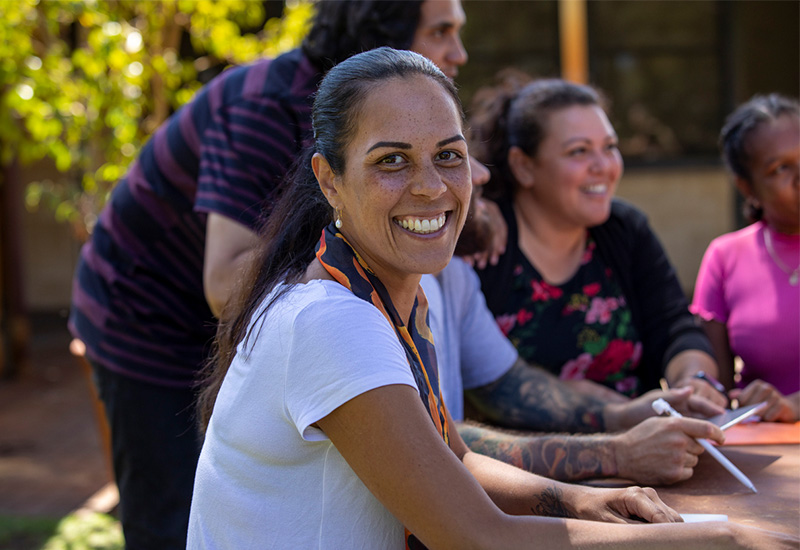 By Sandra Phillips, The University of Queensland

Eddie Koiki Mabo and others made the High Court of Australia recognise in 1992 that terra nullius – nobody’s land – was a fiction. It is taking us longer to kill off its lesser-known cousin, vox nullius. Vox can mean sound, word or voice; ideas of us – us being Aboriginal and/or Torres Strait Islander peoples – having no voice are part of an enduring colonial imaginary.

Bwgcolman midwife and nurse researcher, Dr Lynore K. Geia has referred to us being “bound in a place of vox nullius” – the phraseology is significant. It says as Indigenous peoples we have our voices, but the place of our contemporary existence – Australia – is not hearing or listening.

We are now on course toward a referendum on constitutional recognition. The Australian electorate might respond to the Uluru Statement from the Heart by delivering a green light for a Voice to Parliament. That Voice should go some way to eliminating the vacuum that refuses our voices. And there are many other ways our voices can be heard.

Our voices have always been fundamentally connected to our territories and made visible on Country – in sand, on bodies, message sticks, trees and walls, through waters, and up in smoke. Our voices, as channelled through the adopted technology of alphabetic writing, can be seen in our history of protest writing, our scripts for radio, stage and screen, and in our contemporary literature.

Publishing Indigenous voices in books is complex – culturally and interculturally. So much nuance can be missed or misread. For example, many Blak people see red over initial-letter lower-casing; lower-casing that is frequently used in historical and contemporary colonial lingua franca.

Destiny Deacon, 2022 First Nations Red Ochre Award recipient, coined Blak in a 1991 photograph, “Blak lik mi”, as clapback to all the racists who use black as an insult. Deacon is reported as saying:

Blak – meaning specifically Australian Indigenous people – started to get used more widely and now it’s everywhere, right across the board. Art, music, theatre, dance. I’m glad the Indigenous community is using it and that I get acknowledged for it.

Taking the “c” out of Blak removes the racist from our view, but it also displaces the colour black as exclusive marker of who we are. Indigenous peoples across this continent come in all different skin colours. It is not hard to see how an editor ignorant of our cultural history and contemporary politics would mark up a manuscript to “correct” Blak to black and drive a wedge in the editorial relationship, which only works when trust lives there.

Aboriginal trans/non-binary queer Professor of Indigenous Studies, Sandy O’Sullivan, generously reminds us (in the academy and across social media) that “Aboriginal” and “Indigenous”, as they pertain to us, are proper nouns and as such should be initial-letter capitalised. Sandy and their colleagues have also created an excellent guide to writing and speaking about Indigenous people in Australia. Every editor should use it like a compass as they navigate this terrain.

There have been excellent recent public contributions to maturing Australian publishing. Bridget Caldwell-Bright frames her advocacy for more Indigenous publishing professionals within conversations about diversity. She argues employment is “the only concrete way to ensure that Indigenous expression can exist without having to rely on the cross-cultural editorial relationship”.

Caldwell-Bright has a strong point: fewer than 1% of Australian publishing professionals identified as First Nations in the 2022 Australian Publishing Industry Workforce Survey on Diversity and Inclusion. As a former publisher’s editor who trained and worked at Magabala Books and University of Queensland Press in the 1990s – and who later managed Aboriginal Studies Press in the 2000s – I too advocate for more publishing career opportunities for us Mobs.

But the publishing industry cannot rely solely on its Indigenous workforce to ensure it catches up on effective practices in relation to Indigenous writers and writing. The industry’s culture needs to change to effect sustainable, meaningful and continuous improvement.

Wuthathi/Meriam woman Terri Janke, an international authority on Indigenous cultural and intellectual property, is known for innovating pathways between the non-Indigenous business sector and Indigenous people in business. She has developed protocols for the Australia Council, Screen Australia, the City of Sydney and LendLease, among others.

Her groundbreaking legal and scholarly work on Indigenous cultural and intellectual property rights, epitomised in her 2021 book True Tracks, can continue to be a lighthouse for industries – such as book publishing – that commercialise Indigenous cultures. Respect for these rights and sharing benefits with Indigenous creators are the touchstones of that still-pending future.

Culture incubates literature. A broader national culture in contest with itself can never fully settle the terms of its preferred cultural expression. I often hear critique based on what does or doesn’t contain literary merit as a convenient alibi for what the critic does not feel comfortable with.

Improving our national literature with Indigenous voice could be a mutually beneficial goal if we keep maturing our publishing workforce to not “gubberise” our text – a demand voiced by the late Ruby Langford-Ginibi. “Gubberise” is vernacular from the word “gubba”, which some say is short for “government” – which translates in vernacular as white people.

I am Wakka Wakka and Gooreng Gooreng. I was raised in the North Burnett region of rural Queensland on the Country of my ancestors, the Wakka Wakka. I chose academia as a third career after policy research, then publishing. I have taught editing and publishing studies, as well as literary studies.

In all the mainstream curriculum I have convened as an academic, I have renovated teaching methods with critical Indigenous knowledges, perspectives and resources. Nevertheless, communicating the many specific Indigenous editing issues to a mainstream (albeit mixed) audience is not a simple task – primarily because there is no single style guide that can be adopted for all manuscripts and all authors.

The impulse toward a “How To” guide is understandable, but wrong. Australia is a continent of hundreds of First Nations. There are stark differences here of language, history and culture – and there are nuanced issues of voice, creativity and representation.

Editing any writing for publication is an act of cultural mediation. It requires heavy doses of diplomacy to elicit the best from writers, combined with a hard-nosed pragmatism to get books to market on time. What constitutes “best” in this journey is a value judgement – and value judgements derive from culture.

As you will learn in any editing apprenticeship or publishing studies coursework, there are three primary types of editing. The first is structural editing – what arrangement best suits this story? The second is copy editing – is this written well, do paragraphs and phrases jar, or do they draw the reader in and keep them on their reading journey? And finally, line editing – are sentences scanning well, are typographical errors eliminated?

These are technical skills that can be taught. But fostering cultural intelligence is a broader project.

Even if we gained population parity of Indigenous professionals in the publishing industry, 96.8% of the industry would still not be us. This perhaps explains why conversations about editing of Indigenous literature are most often directed at how to improve the professionalism of non-Indigenous editors.

In same vein, I offer the following suggestions to non-Indigenous editors new to Indigenous cultures, vernaculars, authors and manuscripts.

How Indigenous editors can make a book better

What about the rarer case of an Indigenous editor and non-Indigenous author? When I first sat down as a trainee editor at Magabala Books, that was me.

I was reading a manuscript that should have worked for me: a synthesis of oral and archival history collaborated between an Aboriginal story custodian and a White historian. It was a dramatic retelling of an Aboriginal resistance history and its key fighter. Jandamarra and the Bunuba Resistance had all the things I loved to read about.

But something wasn’t sitting right. Instead of swinging into the text with the proofreading symbols I was eagerly learning, I sat with that manuscript and I started identifying where I was uncomfortable: citing pages and phrases and crafting corresponding questions. A lot of questions – paragraph by paragraph, chapter by chapter. I had so many questions, I produced a separate report. From my perspective, the manuscript read as being apologist for colonist views.

My persistence was rewarded with a stunning authorial rewrite – and the book then won the Historical and Critical Studies Award in the 1996 WA Premier’s Literary Awards. While the Magabala Books website now records the book as “sold out”, my PhD research found that 15 years after first publication, the book was still in print and being sold by tourist operators as a way for travellers to better understand the Kimberley region. I was, at the time of first publication, pretty chuffed with the author’s acknowledgement of my mediated interventions:

When the manuscript appeared ready for print a new editor gave it a rigorous final critique. Sandra Phillips seemed to know exactly the questions to ask. As a result the manuscript was refined to the point where I am happy for its release.

According to journalist and author George Megalogenis, Australia has made history as the first English-speaking nation to become a majority migrant nation. He sees urgent need for a “unifying story for the 21st century”, which might be found in the Indigenous “roots of our family tree”. While some Indigenous people might argue that all non-Indigenous people are migrants, it is worth reflecting on this.

What is our “unifying story”? We are a long way from a national literature overflowing with stories from Indigenous writers, storytellers, creatives and communities. A national literature thus overflowing may not bring about a story that unifies but it could reveal a modern nation-state much more at ease with Indigenous voice – an eradication of vox nullius to accompany the eradication of terra nullius.

Correction: this article originally stated that Jandamarra and the Bunuba Resistance won the Historical and Critical Studies Award in the 2006 WA Premier’s Literary Awards, but it won that award in 1996; this has now been amended.

This article is republished from The Conversation under a Creative Commons license. Read the original article.